I was in a meeting a while back with a group of respected Chief Human Resource Officers (CHROs). Jeffrey Pfeffer, distinguished Stanford Professor of Organizational Behaviour, had just finished explaining why he thought that today’s leadership development is “BS”. The audience cracked up when he told them that his publisher had made up a customized “BS” stamp, with a big, red “BS” that graced his book cover. A couple of people at my table said, “Hey, I wish I had one of those!”

END_OF_DOCUMENT_TOKEN_TO_BE_REPLACED Leadership behaviour always tells untold stories. There was a timely interview in January with Van Jones and the Rev. Charles Williams about Hilary Clinton’s leadership and why Detroit didn’t vote for her. Jones and Charles discussed the massive funds the Clinton campaign had raised to unearth all of kinds of stats and facts. This information, interpreted well, should have generated the insights that ensured voter support. At one point in their tour of a hard-on-its-luck neighbourhood, Jones asks Reverend Charles what happened. Without missing a beat, the Reverend said, “Data don’t vote”. It was a “zinger” I’ll never forget.

A zinger is a way to communicate a critical message when time is of the essence. It’s a way for leaders to cut to the chase and spur action. In those three small words, the Reverend sized up not only one of the most mystifying election defeats in our time, but also hit the nail on the head on our over-reliance on data and money to “solve” our problems.

There is a lively stat war going on out there in the leadership biosphere. The last time I looked, there were 85 million entries about ways we measure leadership. And that may or may not include Pinterest visualizations…But at the end of the day what do these numbers tell us about how we start redefining leadership, behaving differently and changing the way we lead?

We know, for example, that one of the dirtiest little secrets in employee engagement surveying is that the results are often so poor that reports are shoved into a drawer with the hope that if we wait long enough, they’ll disintegrate into a fine dust.

Here’s but one example of the conundrum that leaders, and HR experts alike, face.

Recently, VisionCritical cited that 80% of employees said that they don’t even believe HR will act upon the results of employee surveys. But wait… Forbes says that only 32% of bosses indicated that they value employee retention as a key measure of their success. Oh, so does that mean that the bosses are hoping that HR leaders will get to work on retention to help them out or does it mean that HR should help out employees and get to work on the bosses? Or both? What’s an HR leader to do? How does all of this square with creating a climate for 21st Century leadership?

And here’s the thing. Leadership statistics don’t lie – H.R. professionals, Execs, academic researchers, and consultants all have the best of intentions. When it comes to analyzing and interpreting survey results, everyone wants to support leaders and their continued development. But maybe the stats are just not telling us a story we can effectively work with anymore.

What can we can do about this? What if stakeholder groups in the leadership community worked concertedly to move people to think deeply about the how of leadership.  You know: how we define leadership; how we change as leaders; and how we shape processes as leaders. What about redirecting all that “plus and minus” energy to explore how we take smart action when strategy fails, targets are missed, or patterns remain unrecognized? Ironically, this means snapping in two most of how we have come to measure our progress in leadership development.

This kind of leadership development is not for the faint of heart. I’d much rather read a report or spend a few hours with a cup of tea and a coach who is devoted to my every need and peeve. Who wants to take a long, lonely look inside of themselves to dissect and analyze their own leadership wiring? It’s brutally tough work. But what we know is that putting yourself under the microscope is what truly yields fundamental and deep change in people. There is only one place to start. It’s not some survey, it’s not with some stat. Here’s the zinger: “Data Don’t Lead.” Your untold story, not a bunch of facts and stats are the essence, the ethos of your leadership. So blow the dust off the jacket, start with the front, the back or the middle of book that is your life and begin re-writing your leadership story. 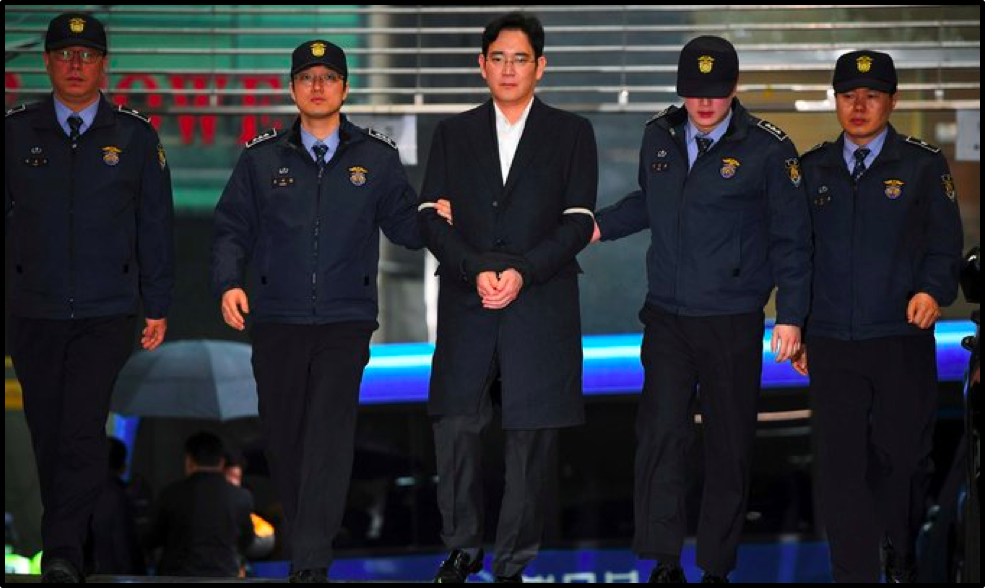 Maybe it was that the handcuffs were camouflaged in perfectly matching material that seemed to be an outgrowth of his tailored top coat. Maybe it was this very deft attempt to hide the obvious: “I’m busted – but at least I have some modicum of dignity”. I’m not sure what haunted me more about the image – the alleged crime or the performance. The image almost made me forget the story. It was one of 2016’s most incendiary stories, that of the battery burning Galaxy Note 7. But the photo of Jay Y. Lee, vice chairman of Samsung, being led away by police during an investigation into corruptions charges, said it all.
END_OF_DOCUMENT_TOKEN_TO_BE_REPLACED